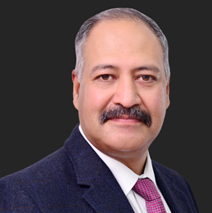 Vikram served for over twenty seven years in the Indian Navy, as a helicopter pilot among other positions. In his last appointment, he was in charge of processing Capital Acquisition proposals of all the three services for over three years. His professional background gives him a unique insight and understanding of the nuances of Capital Acquisition procedure and related functioning of the Government of India, along with the Indian Military. He was awarded Chairman Chief of Staff Commendation in 2016 for proficiency in Defence Procurement.

While in the Indian Navy, he took active part in operations like “Operation Vijay” and “Operation Parakram”, and commanded a ship and a helicopter squadron. He also served as the Commander Air, (Air Boss) of the first India-US ship deal of USS Trenton, an LPD, and of the six helicopters (UH-3H) procured by the Indian Navy along with the LPD in 2007.